Yesterday was an interesting one. Checking my daily Google Alert, the first two hits were articles on the UK’s Express Online. One was on myself, in reference to Being with the Beings, and the other was on Stanton Friedman, looking at his chapter in We Are the Disclosure. 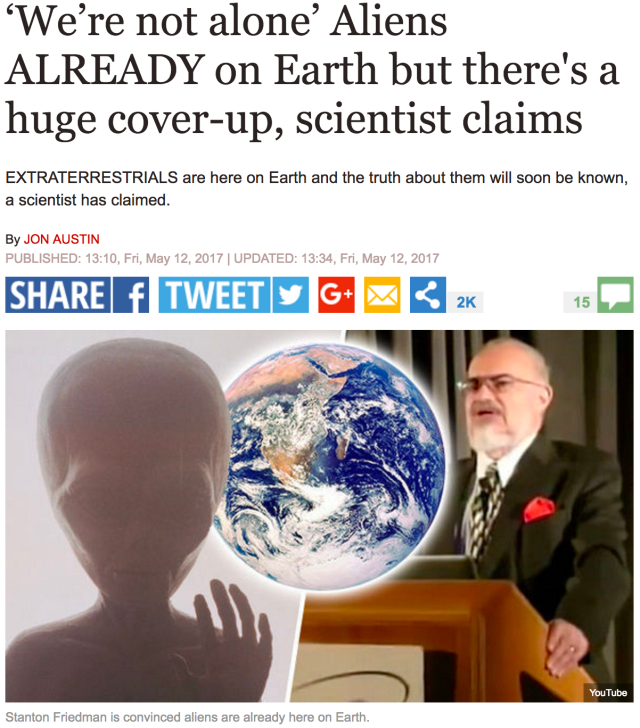 Here we have the first of the three kinds of coverage I’ll talk about: the mainstream media. Now within this there is generally a spectrum, from mocking to serious, but the articles above are played with a fairly straight bat. I studied journalism in a former life, and the ethic of ‘just report’ was hammered into us. Don’t take a side, don’t editorialize, just say what happened. That objectivity, however, also lives alongside the idea of ‘balance’. So the best you can hope for in the mainstream is to read things like this: “In his most recent work – Being with the Beings – a compendium of interviews with nine so-called alien contactees, published this year, Mr Mendonça describes his own alleged contact with aliens.”

I’m trying and failing to avoid pointing out that I have never once used the phrase ‘alien contactees’. And I also cannot help finding the word ‘alleged’ an odd choice, as I have never used the word ‘aliens’, and have no idea from where or whom the telepathic messages arrive. This is one of the problems with this kind of coverage – it lacks important accuracy and subtlety.

The value in these articles is that some of the ‘right’ people may read it – those how are ready for the information, or find it useful in confirming their own experiences.

The second type of ‘coverage’ is not really coverage. It is the response in the comments section. But for others reading such comments, there may be a sense that this is legitimate, insightful, useful information. In a way, this is the most fascinating aspect of the articles. You get a tour of the minds of people who presumably have never set foot in these realms:

GeoffAlan
Barking – must be a member of the Flat Earth Society and the Green Party.

Had I the stamina and fortitude I would be sorely tempted to do a study of this slice of society. Some call them ‘Muggles’, referencing the Harry Potter universe, generally meaning the uninitiated. The non-magical, those not conversant with a particular activity or skill. But who are they really? And why are they so aggressive? I feel one would have to peel back quite a few layers to reach a satisfying answer, but my sense is that these ideas are just too disturbing to a materialist mindset that has no room in it for larger ideas. But the reference to the Green Party is important. Having researched both subjects deeply I have seen many commonalities between the ‘ET’ subject and sustainability. Centrally, they are huge, complex, holistic subjects with the highest potential impacts on human existence. They are also spiritually-demanding issues, which force us to confront our pathologically materialist culture. When the culture in which one lives insists on measuring everything – including self-worth – in both quantitative and qualitative material terms, then it is profoundly troubling to consider that these things are not only transient and of little intrinsic value, but are in fact becoming a threat to human survival. The cognitive dissonance is understandably just too uncomfortable to deal with.

Having never studied psychology formally, I can only offer a layman’s response to these matters. Some time ago I would have pitied such hearts and minds, but working on We Are the Disclosure was a catalyst for me. By the end I no longer saw separateness and helplessness. I found confidence in the cosmological narrative that says that all of life is One, all of life is seeking evolution through experience and all of life is in choice. So those who are boxed into a confined view of reality are expressly here for that. The 3D realm specializes in experiences of constraint and limitation of all kinds – as well as offering the experience of transcending those limitations.

This leads me to the third category of coverage. Those who do get it. Within an hour of reading the Express articles I discovered through Steve Mera that Being with the Beings is the book of the month in the UK’s Phenomena Magazine.

It was a relief to be reminded that there is a global community of people who connect with this subject intimately. From the outside, from that materialist place, certainly it can sound crazy. Anyone who has read my books – Meet the Hybrids, We Are the Disclosure and Being with the Beings – is going to find things that do not resonate. Some of the people interviewed may seem off to them in some way. This should not be a surprise. The whole process has reminded me just how varied humans really are. We cannot expect to make sense to everyone. We are simply too diverse, complex and inscrutable as a species. Again, this may well be central to the 3D experience.

I also received this feedback from Cynthia Crawford, whom Barbara and I interviewed in Hybrids: “Your book, “Being with the Beings” is wonderful, especially the way each one describes the experiences and how they connect with them. There are so many people that create fear, and it’s understandable why they do this, because the dark side can take our power from us if we feed into fear. What I like about this book is it is so positive and flows so easily, everything makes sense. Your work is so important, and I think there should be classes teaching humanity how to embrace contact, using your books.”

Cynthia gets all this as much as anyone I’ve met, so again, there is a sense of relief to have created books that make sense to, and are considered useful by, those who have been deeply involved in this subject matter for decades.

So we could say that the coverage of this subject is obviously going to vary to the degree that people are aware of and potentially involved in it. And we can say that their response tells us first and foremost about themselves. It can be no other way. They tell us, often indirectly, about their worldview, their values, their self-image, their hopes and fears. In fact if people were aware of how much of themselves they are giving away, they may be more circumspect in their comments. This comes right out of The Four Agreements by don Miguel Ruiz. The Second Agreement says: don’t take anything personally. Everything people say and do is primarily an expression of who they are.

My view – at least today, because it is always evolving – is that all responses are valid, and even the apparently mindless abuse serves a purpose. Everyone who shares an experience or a view adds to the dynamic and energizes the discussion in important ways. If you step out of the ego it can be quite funny, depending on one’s sense of humor. And it is a reminder to those of us immersed in this community – that above all seeks expansion and connection – that we are still a minority in most cultures. So supporting one another is vital, as these public sharings of our experiences can be difficult. When I began this work it never crossed my mind that I would find myself in this position, as one of the experiencers. I did not identify as an experiencer, or feel confidant giving names to the encounters I have had. But the people I have met in this field, whom I have come to consider brothers and sisters, also help me in dealing with the occasional abuse. We all get it, and many are far braver than I in coming forward, particularly those who are willing to go on TV and news shows to get laughed at by presenters and the audience. They also know that it may be important to others to see that, as Patton Oswalt said of RuPaul, some people are willing to lay down on the barbed wire of prejudice so that others can run over their backs.

The more our community shares publicly, the more the experiencer stories seep into the public consciousness. And over time they are beginning to connect up with the increasing noises from NASA and other institutions on the existence of other forms of life – even in our solar system. Little by little, humanity is being eased into the recognition that we are sharing the universe with other forms of life. There may well come a day when our community is invited by various media groups and scientific institutions to share all that we know. And they will find decades of material that has up until now been mocked or ignored by them. It is getting easier and easier to see that threshold moment approaching, and I feel sure that no one will be quite ready for it. But I know that, as per the Fourth Agreement, we will do our best.