Robert has been among my favorite people to interview over the course of these books. He has such a down-to-Earth way of describing his journey, and gives us an amazing insight into the life of an ordinary guy going through the most extraordinary awakening process. He has produced images of the beings he has connected with, as well as representations of the many downloads he has received. 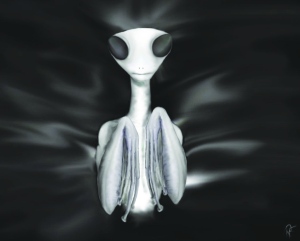 One of the Mantis beings which Robert describes in detail in his chapter in Being with the Beings.

The Goloids, also discussed in Beings. Here they are shown performing a procedure involving Robert’s brain while he was fully conscious.

One of the downloaded geometric designs received by Robert. I believe it was this one which caused a lady at a conference to slip into an altered state of consciousness, in which she found herself on board a spacecraft!

A diagram of the craft which Robert and his wife saw in a 45-minute encounter in Northern California. Robert’s description of this experience is the funniest and most gripping UFO encounter I have ever heard.