Louise Applegate is an artist who has worked in stained glass and mixed materials for over 30 years.

She came up with a novel method for the cover art of We Are the Disclosure. She saw a piece of stained glass in a church which featured a stag beetle, and was inspired to recreate it by etching into crayon. 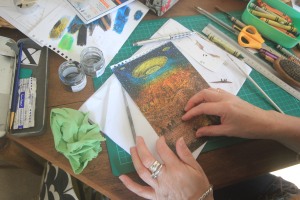 When we had decided on a concept for the cover art, she used this same method and built up the image. It was inspired by a conversation with Alexis Brooks, in which we realized we had had very similar dreams, in which we were showing others that there were UFOs in the sky above us. 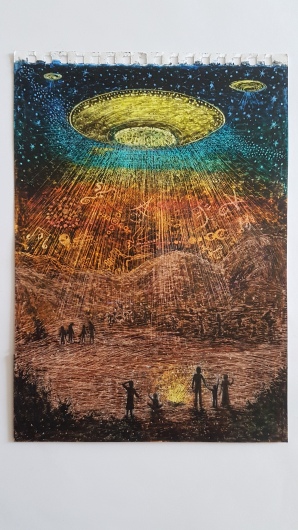 This is a powerful image for me, and represents the group of pathfinders who are helping humanity to identify, understand, accept and work with these other intelligences.

The work that is done between the beings and ourselves is the core of the book which followed Disclosure – Being with the Beings.

It also represents the idea that the most authentic and available Disclosure is simply when people share their experiences with others.

When we were looking at the image in an image editor called Affinity Photo, we had the happy accident of transforming the image using a blend mode, and it came out looking like a woodcut.

We liked this so much we used it on the covers of parts I and II.